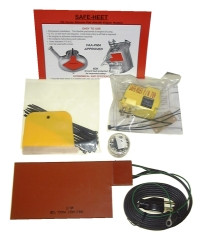 EASY TO USE
SAFE-HEET is a thin flexible pad that is bonded to the engine oil sump.  The kit is complete with materials and step-by-step instructions.  A log book entry is all that is required for permanent installation; No S.T.C. or 337 form required.  There are no airframe modifications required.  SAFE-HEET can be used with a timer or the 707 temperature controller, and uses standard 110 A.C. voltage.  We recommend using the SAFE-HEET 707 Temperature Controller to cure the adhesive for faster installation.