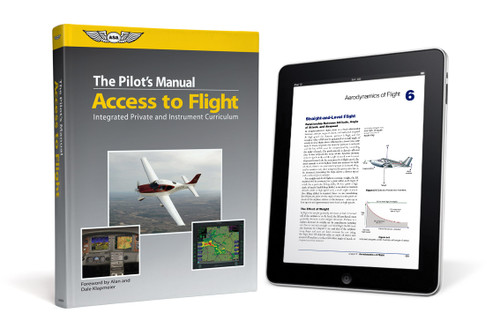 Integrated Private and Instrument Curriculum. The most efficient way to train for your personal transportation solution!

Meeting the challenges of training in the 21st century!

Whether you fly for pleasure, business, or a career in aviation, the Private Pilot certificate with the Instrument Rating is your ticket into the full spectrum of the airspace system — it is the key to maximizing the utility of a general aviation aircraft. This book provides the information you need to learn how to fly under both visual flight rules (VFR) and instrument flight rules (IFR). The most comprehensive pilot textbook available, The Pilot's Manual: Access to Flight provides efficient training methodology that helps you graduate with a truly successful personal transportation solution.

Technically Advanced Aircraft (TAA) demand a level of understanding and functional proficiency as never before. This breakthrough course is simply the most efficient and comprehensive way to prepare for flight in TAA and today’s increasingly complex flight environment. In addition, chapter review questions will help prepare you for the FAA Private and Instrument Knowledge Tests.

General aviation has undergone an extraordinary transformation in recent years. EFIS (electronic flight instrument system) or “glass” cockpit-equipped aircraft, once the exclusive realm of airline, corporate, and military pilots, have now proliferated the GA landscape. In what seemed like the blink of an eye, pilots and instructors accustomed to flying aircraft equipped with conventional gauges that hadn’t changed much in almost 50 years were now sitting behind sophisticated systems with glowing displays, comparable only to some of the most advanced airliners and corporate jets. These second generation “Technically Advanced Aircraft” (TAA) literally represented the coming of a new age and the promise of nearly unlimited potential. At the same time however, the arrival of these sophisticated aircraft created an unprecedented training and operational challenge never experienced in GA. The Pilot's Manual: Access to Flight has been specifically crafted to meet this challenge, making use of methods that will allow pilots to obtain the maximum safety and utility from their aircraft.

For the first time ever, Private and Instrument curriculums are integrated so pilots flying TAA learn to intrinsically manage the combined skills of aircraft control, task management, systems management, and the complex flight environment of today’s busy airspace. This is a very different approach from the practice of traditional maneuver-based flight training used heretofore. With a realization of the inadequacy of maneuver-based training as applied to TAA, The Pilot's Manual: Access to Flight embodies the state-of-the-art industry training standards of scenario-based training (SBT), learner centered grading and involvement, and single pilot resource management (SRM). These are real world skills, taught with a train-like-you-fly, fly-like-you-train philosophy, treating each and every lesson as a "real" flight. This is where harnessing the power of all available resources and aeronautical decision making (ADM) become second nature. Whereas maneuver-based training focused specifically on simply learning to control the aircraft, this new methodology involves considering an entire flight, and all its component aspects, from beginning to end.

ALSO AVAILABLE AS A BOOK! 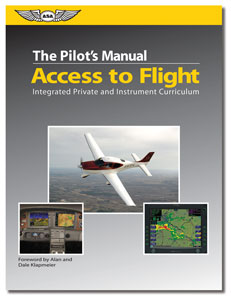